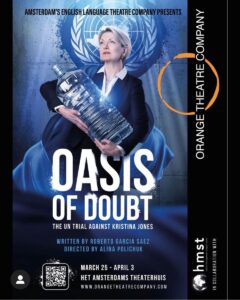 An OTC and HMST co-production

Written by Roberto Garcia Saez and Directed by Alina Polichuk

Do we really know each other or ourselves? Even if we start out with the purest intentions, what rules are we willing to break for the greater good when faced with an imperfect system?

After commissioning the construction of thousands of wells in Sub-Saharan Africa, high-powered UN diplomat Kristina Jones is facing charges of bribery in a UN trial. Is she the public servant she claims to be, working towards peace, dignity, and equality under the UN flag? Or a master manipulator cashing in on others’ misery?

Investigators Paul Harrison and Hilde Burns have made it their personal mission to find out the truth. But the saintly Paul may also not be what he seems; dedicated to serving justice to the world’s most deprived or a bitter hypocrite stuck on the road to nowhere. There’s a lot resting on Hilde’s shoulders.

Oasis of Doubt is a political satire, loosely based on the personal experiences of the writer Roberto Garcia Saez, a former Senior UN Officer. This OTC play is a co-production with HMST, and is directed by Alina Polichuk. It will have its world premiere on Friday March 25.

* Premiere Night tickets on March 25, includes a glass of fizz and an exclusive Q&A with the cast and crew.

* 10% discount on group tickets for 6 people or more! Click Here